This year, INBOUND is playing host to some of the most prominent figures in business, philanthropy, and entertainment. If you haven’t registered for INBOUND 2022 yet, sign up today to get your chance to hear from these thought leaders. 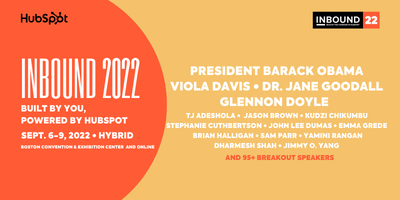 Barack H. Obama is the 44th President of the United States. He was elected into office at an unprecedented time in American history. He helped the country face numerous crises, including war, the climate crisis, and the largest recession since the Great Depression.

Obama’s path to the White House was also exemplary and improbable.

He started his career as a community organizer, helping Chicago communities rebuild after being devastated by the closure of local steel plants. As a student at Harvard Law School, he became the first African-American president of the Harvard Law Review. After graduating, he taught constitutional law at the University of Chicago, eventually winning seats in the Illinois State Senate and the United States Senate.

In his run for President of the United States, Barack Obama won more votes than any candidate in history.

President Obama is widely loved for his leadership, as well as his skills as an orator. He will be speaking on Friday, September 9th at 2:45 PM.

Viola Davis is an actor, producer, and philanthropist. She is the first black actress to win Tony, Oscar, and Emmy awards. Davis starred in the ABC series “How to Get Away with Murder, which aired its final episode in May 2020 and drew 14.24 million viewers during its 2014 premiere.

Viola Davis will be speaking on Thursday, September 8th at the 9:00 AM morning session.

Dr. Jane Goodall, DBE, is the Founder of the Jane Goodall Institute and a UN Messenger of Peace. She is one of the most well-known and widely respected ecologists and activists in the world. Goodall is perhaps most widely known for her studies of wild chimpanzees in Gombe Stream National Park, Tanzania.

Today, Goodall is reaching a new generation of changemakers through her “Roots & Shoots” environmental and humanitarian youth program, which is now active in over 60 countries.

Dr. Jane Goodall will be speaking on Thursday, September 8th at 11:45 AM. Her talk will cover topics of sustainability and efforts to protect the world we all share.

Glennon Doyle is the author of the #1 New York Times bestseller Untamed, which sold two million copies. She is also the author of Love Warrior, an Oprah’s Book Club selection, and Carry On, Warrior.

Doyle is also the host of the “We Can Do Hard Things” podcast, is an activist, and has been called a “patron saint of female empowerment” by People magazine.

Glennon Doyle will be hosting a fireside chat on Thursday, September 8th at 4:30 PM.

Emma Grede is the CEO and Co-Founder of Good American, which she launched in 2016 alongside Khloé Kardashian. Good American is the first fully inclusive fashion brand, and it celebrates all dimensions of female power.

Grede is also a founding partner of SKIMS, a solutions-oriented clothing brand, and cofounder of Safely, a plant-powered, chemical-free cleaning brand.

Emma Grede will be hosting a fireside chat on Wednesday, September 7th at 4:30 PM.

TJ Adeshola will be hosting a special morning session alongside Kudzi Chikumbu on Friday, September 9th at 9:00 AM.

Jimmy O. Yang is an actor, stand-up comedian, and writer. He is best known for his portrayal of “Jian Yang” on HBO’s Emmy-nominated series “Silicon Valley.” He is also well-known for his role in Jon Chu’s “Crazy Rich Asians,” and starred alongside Mark Wahlberg in the highly acclaimed movie “Patriot’s Day,” directed by Peter Berg.

Jason Brown is a thought leader, mentor, and innovator in sports and entertainment marketing. He currently serves as the Chief Marketing Officer for the shopping platform NTWRK.

Sam Parr is the co-host of the My First Million podcast and founder of The Hustle, a digital space for business news and thought leadership.

He is also the founder of Trends.co, which was recently acquired by HubSpot. Trends.co is one of the United States’ fastest-growing media companies focused on millennials, technology, and culture.

Kudzi Chikumbu is a media technology executive and an advocate for diversity, inclusion, and representation for online creators.

He was born in Zimbabwe and grew up in South Africa, where he formed strong views on diversity and emerging creatives. Chikumbu began his business career as an account and management consultant, then enrolled at Stanford Graduate School of Business, where he received his MBA in 2016.

Kudzi Chikumbu will be hosting a special morning session alongside TJ Adeshola on Friday, September 9th at 9:00 AM.

Aside from the above Featured Speakers, we have dozens more innovators that will light up the stages in Boston. See all of them here.